Our Summer! Idea Collection with the PB Interns

Follow the journey of two of our Summer Interns as they describe their summer collecting ideas for Participatory Budgeting in Cambridge!

We have done it again Cambridge! We beat the record of ideas from all years prior with over 1600 amazing ideas submitted all from your great minds.

During this time we have been working to bridge the gap between city government and community members. None of this would have been possible without your help! Through your civic engagement, you have helped put forth so many great ideas that will help improve Cambridge, so we thank all who participated.

Here is a map of what our journey to collect 1,644 ideas has looked like. Our next step will be to partner with community delegates as they comb through all of these ideas and whittle them down to the final twenty for you to vote. 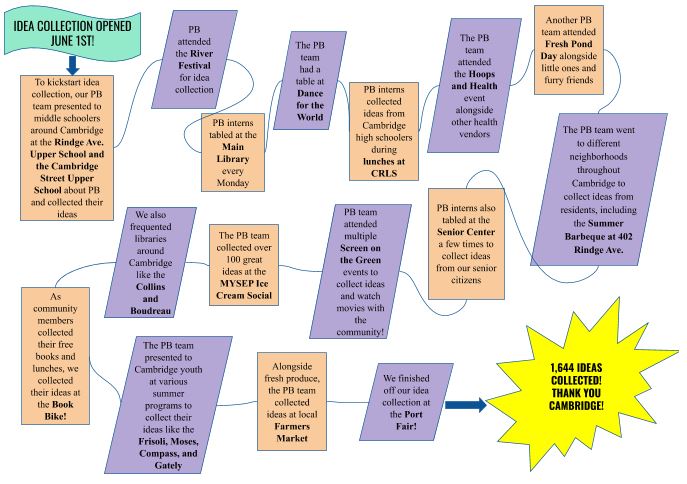 This was my first summer as an outreach intern for Participatory Budgeting. As a life-long cantabrigian, I had heard of PB vaguely and had even voted once or twice before. But I was never really sure about what PB, what the process was, or even what project actually got funded. Even if I did not know much about PB before this summer, like many in Cambridge, I had already benefited from the projects unwittingly. I had passed the public toilet in Central squares multiple times and heard about the new instruments for CRLS from the excited voice of my sister, who though now graduated, played in the CRLS orchestra for four years.

In preparation for this internship, I researched the history of PB and learned about how the process’ history and its expansion to over 1,500 municipalities and institutions worldwide. I dove right into the PB internship by presented to middle schoolers and attended many events alongside my fellow interns. We worked to spread the word and diversify the pool of ideas we gathered. One of the things that I noticed, was how excited young people were, especially, by the prospect of coming up with ideas. One of my first days in early June, I went to do a workshop in a 6th grade class at the Kennedy Longfellow school. I was anticipating a bored class who were counting down the days for summer break.  I was amazed not only by how invested the students got, but really by how remarkable their ideas were. They wanted to buy more art supplies for their classes, better bike lanes to get to school safer, indoor playgrounds, and more sustainable energy. Of course some of their ideas were a little less serious, like the idea to build a giant Roomba to vacuum up trash on the streets. But even though it was less serious, it was still addressing a real problem that the students had identified.

Over the course of these two months, two things have dawned one me. The first is that everyone has an idea for PB. Yes. Everyone. Even if you don’t think you do, you do.

As community members approached us at events, they were always excited to vote in December, but often claimed that they didn’t have any ideas of their own. I’ll admit, it is hard to come up with a good answer immediately after someone springs the question “how would you spend a million dollars to make Cambridge a better place.” But with a bit of thought everyone can come up with an idea.

I ended up submitting one or two ideas of my own. They may not have been the most creative but they gave me an incredible sense of civic engagement. While I did not think initially that I would be able to come up with an idea, after a couple days of thinking and noticing the things that bugged me about the city. Any member of a community has SOME idea of how to make their city better, it’s just a matter of taking some time to think and really noticing your surroundings.

The second thing that really struck me throughout the process of collecting ideas for PB was that though there are so many ways that we can continue to make Cambridge a better place there are so many resources that Cambridge ALREADY has that I had no idea existed! Book Bike (http://www.cambridgebookbike.org/) provides free books to kids throughout Cambridge to cultivate literacy and build home libraries; The Summer Food Programs (https://www.cambridgema.gov/DHSP/programsforfamilies/summerfoodprogram) provides lunches to children during the summer months when family can not rely on school lunches. Even more resources like these can be found at events like the Fresh Pond Day or online at Findit Cambridge. PB is about making Cambridge a better place, but it has also given me a new appreciation for the city in which I have grown up.

Though we are no longer collecting ideas for PB6 pay attention for voting in December. YOU too have a voice in helping to make Cambridge a better place.