From March 22-28, the City of Cambridge is holding a Participatory Budgeting VOTE for all residents 12 and older. Hundreds of people have submitted ideas for projects that would improve the City – this week, we get to choose which projects the City will implement. 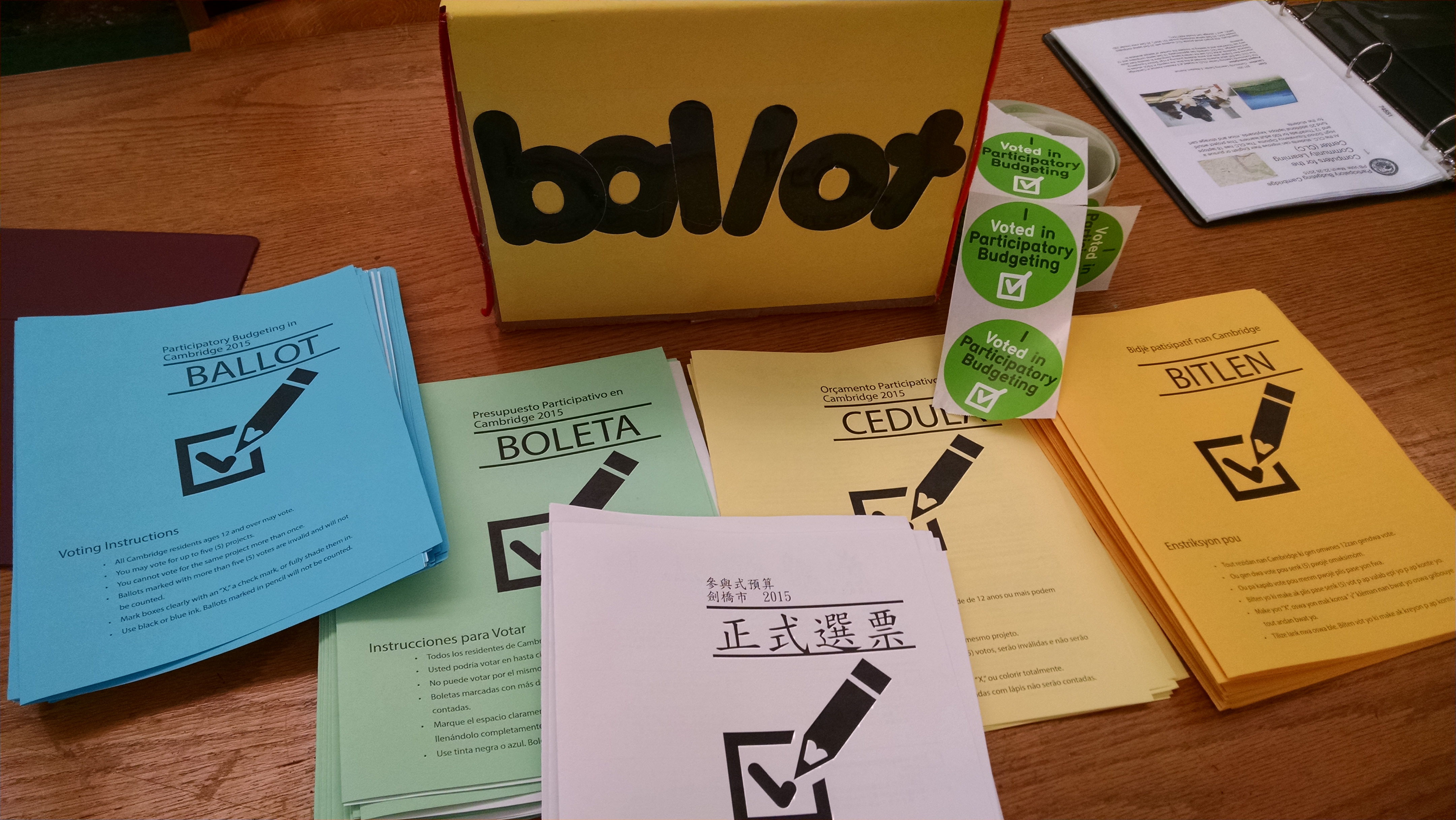 The City of Cambridge is giving residents an opportunity to decide how to spend $500,000 of its budget. Over the past several months, the Participatory Budgeting Project (PBP) has been working with City staff and a group of volunteers to crowd-source project ideas and develop concrete project proposals.

Cambridge residents who have collaborated with the City’s Budget Office and PBP to develop project proposals are excited to share these ideas with their communities. Cambridge’s Participatory Budgeting process has been unfolding since last summer, when the City agreed to committ $500,000 of the Capital Budget to this community-led decision-making process. Volunteers signed up for the Participatory Budgeting Steering Committee and as Budget Delegates, getting the word out to their neighbors about the process and collecting ideas about the types of projects Cambridge residents were excited about.

The projects that are being voted on from March 22-28 are the result of months of idea collection and research by these groups of volunteers. There are 20 projects that fall within 4 broad categories: Culture & Community Facilities; Environment, Public Health, & Public Safety; Parks & Recreation; and Streets & Sidewalks.

The Budget Delegates from the Parks & Recreation group described how the 20 potential projects were selected – first, they asked if the projects were feasible. Next, they grouped similar projects together. Before developing cost estimates for proposed projects, the Delegates emphasized how the projects could be useful to the community. “We want it to be useful to as many people as possible. This is a unique process, and not many other cities have this chance.”

Examples of projects that Cambridge residents will have an opportunity to vote on from March 22-28 include a new community garden, an amphitheater for performances and events, bike repair stations, computers for the Community Learning Center, a public toilet in Central Square, and many other innovative ideas. Some project proposals are sparking important conversations about what types of projects are possible in the City. For example, a staff member said that the public toilet proposal was one of her favorite projects, “but people are very opinionated about it. They either think it will definitely win or they think the toilet project would never work.”

This is an exciting opportunity for Cambridge residents to weigh in on the types of development they would like to see in their neighborhood. What are your priorities for public investment? What kinds of projects would have a positive impact on your block, your commute, or public spaces near you?

To see a complete list of the projects, to learn when and where to vote, or to vote online, go to: www.cambridgema.gov/yourbudget.

All Cambridge residents 12 or older can vote, so see you at the polls!